As the CEO of what might look like a normal digital agency at first glance, I get tons of emails from outsourcing companies that want to offer their development services to us. Two things that usually come up as key benefits are low WordPress developer rates and a wide range of technologies offered besides WordPress.

We’re not a potential client for these outsourcing companies (digital agencies hire WordPress developers from us), but if I was then those two benefits are not on the top of my list. Most digital agencies have decided to go with WordPress as their primary CMS, and a low rate can easily lead to fewer profits unless done right.

WordPress developer rates in the US vs rest of the world

An article by Colin Newcomer for Elegant Themes’ blog provides a nice summary of resources that have examined WordPress developer salaries in the USA on a yearly basis, and freelance rates across the globe. He concludes that the data points to:

From discussions with US agencies that work with us, we have also heard WordPress developers being paid as much as $100,000 – $150,000 in some cases. It’s been a combination of highly skilled developers and an attractive location in these cases.

Any ‘Sales Tactics 101’ book will tell you not to speak about pricing before you’ve convinced the potential customer about the high value of your offer. It’s not just a sales trick, it has merit for how you should think about your business.

What value does a WordPress developer bring to your agency?

The main value that a developer brings is to take designs and deliver a working website in a timely manner. However, there are other skills and tasks that a WordPress developer might work on depending on the types of projects you have and the distribution of responsibilities in your team:

These are typical roles of developers that work inhouse, as a team player that weighs in on decisions in general and build relations with partners, etc. For a smaller agency or a highly technical agency, these values can be central to the business. Hence, their rates are usually quite high. The more technical the project, the higher the budget and the more value can be contributed by the developer.

When development becomes a form of production

However, for larger agencies that have specialized roles in the team and a lot of experience, development itself becomes more a matter of “production” where value creation is a bit different.

A professor that I had the privilege to work with at my previous job told me that while product development is all about value creation, production is about preventing the destruction of that value while building the product.

I’m paraphrasing here, but the central idea is both harsh and brilliant.

When the designs for a product or a website are ready, the next activity is to bring them to life just as they were imagined. Production is prone to flaws, and quality management will tell you that no product will ever be 100% like the designs (if you look close enough). So the ideal result is that there are no surprises at all, no quality issues but just a website as it was intended.

How do you then judge the value of the developer?

This third value is more related to cost, so let’s shift our attention to the cost side.

Let’s look at the total costs for development of a WordPress website, defined as the activities happening after designs and briefs are handed over to development up until the site is ready for the content team or for going live, depending on your process.

Let’s run a simple calculation for a typical project. Let’s first assume we want to compare three developers that have the same skill level but differ in rate: $150/h, $50/h, and $15/h.

BUT, it’s likely that the efficiency and quality of developers charging an hourly rate of $150, $50 and $15 respectively are very different. Let’s account for that in a new calculation. 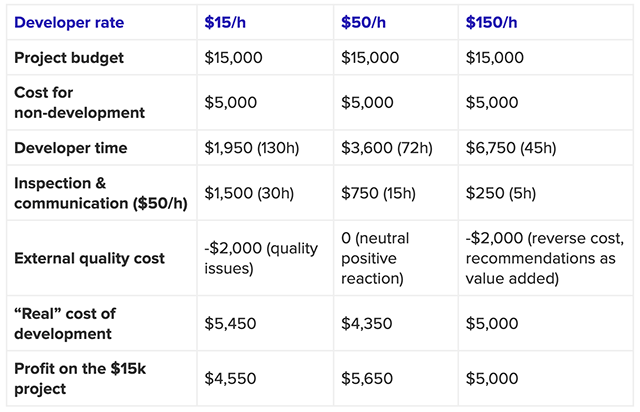 The calculation above is based on rough estimates and assumptions, and I encourage you to use your own numbers from experience to find how this calculation looks for your business.

The main point is that the rate plays an important role in the total cost of your project, but it’s way more complex to find the “lowest total cost” setup for your agency.

My recommendation is to start with the general vision and business plan that you have and match the profile of a developer that you need with the value they can reasonably bring to your projects.

If you have a production-like setup, you’ll be looking at optimizing quality and efficiency around $15 – $75 for WordPress developer rates, and if you’re going after fewer high-margin high-complexity sites you probably need to be looking at $75 – $150 as the hourly developer rate.

“Start with the general vision and business plan that you have, and match the profile of a developer that you need with the value they can reasonably bring to your projects.”

The developers you find with an hourly rate of $15 are probably working in a different area and in a different constellation than those that charge $150 per hour.

If your agency is small and nimble enough to handle uncertainties of working with remote freelancers, you can try to find the lowest-bidders that still live up to your standards. However, if stability is important for your operations and you need a whole team of developers, you need to also be looking at the costs of hiring and training new developers, administrative costs and office space costs if they’re internal.

For external developers, the cost of maintaining a good relationship with your outside agency will need to be factored in, as well as the value of being able to lean on them to allow you to sell more projects without taking on extra risk.

“If stability is important for your operations and you need a whole team of developers, you need to also be looking at the costs of hiring and training new developers, administrative costs and office space cost if they’re internal.”

Despite sharing the job title of “WordPress developer”, you will see a widespread of rates charged for what appears to be the same service provided. This article argued that it’s not really the same service provided, and you’ll need to consider the efficiency and quality that you get before knowing what’s the most cost-effective solution for your agency.

Outsourcing companies will offer you lower rates than your local development company, but finding the right balance between rate, quality and stability has proven very challenging to many agencies.

We’re in this spectrum ourselves and we position our services to primarily be a great fit for the larger agencies that have a holistic view on cost and value. It’s in our mission statement: “best total value”.

If this is not your goal then we have little chance at being your preferred development partner. And we’re not afraid to admit it since it allows us to be a better partner for those who look for what we provide.

Send us a message if you want to know more about the value we can bring to your agency and what our rates are.